West Norfolk-based Feltwell Growers grows approximately 6,000t of radishes on 400ha of fen near Downham Market. The company is part of G’s Growers – one of the UK’s largest salad and vegetable producers – and the radish enterprise is run by manager Scott Watson with assistant manager Sam Bretton.

Radishes are planted from February and harvesting starts in March, with final crops drilled in September for harvesting in late October. Harvesting six days per week meets sales demand from wholesalers and supermarkets.

The black fen soils are vulnerable to damage – especially when working conditions are wet. “We farm in an environmentally sensitive area and do what we can to minimise ground damage,” explained Scott. “It’s important to us and the supermarkets we supply that we protect the land and reduce carbon release, but after two successive very wet autumns when excessive rutting occurred, we needed a long-term solution.”

Much of the damage is caused by trailer wheels which create deep ruts when conditions are wet. Trailer manufacturer Richard Larrington was approached by Scott and his team to find a solution. “The original idea was to build a tracked trailer to carry wheeled trailers to and from the harvester in the fields,” explained Richard. “However, when we looked at the practicalities it became obvious that a trailer weighing at least 10t was required to carry a loaded trailer weighing 25t, and that would need four rubber track assemblies to achieve ground pressure equivalent to 1.0Bar per square inch. Not only was it a very complex solution, it would also cost £150,000–£200,000, so we looked at alternatives.”

The latest VF tyres were considered – capable of operating at low pressures down to 1.0Bar to maximise the contact area and reduce ground pressure. Michelin loaned four VF 560/60-22.5 Trail XBib tyres which were fitted to one of the trailers, and a set of XeoBib VF 710/60R42 rear tyres and VF 600/60R30 fronts was fitted to one of the tractors. The tractor and trailer tyres were all inflated to 1.0Bar. A similar trailer equipped with its existing tyres inflated to the recommended 3.6Bar operating pressure and towed by a tractor with tyres at 1.2Bar was used as a comparison. Both were driven across wet ground typical of conditions experienced during a typical radish harvesting season.

“The trailer on standard tyres sank and the tractor pulling it became stuck,” explained Richard. “It took three tractors to pull it out.

“We then approached the same area with the tractor and trailer on Michelin VF tyres and were convinced it would become stuck too, but it drove across the surface with no problems at all. I was amazed – we hadn’t spent vast amounts of money on sets of rubber tracks. We had only let air out of the tyres to spread the same weight over a larger area.” 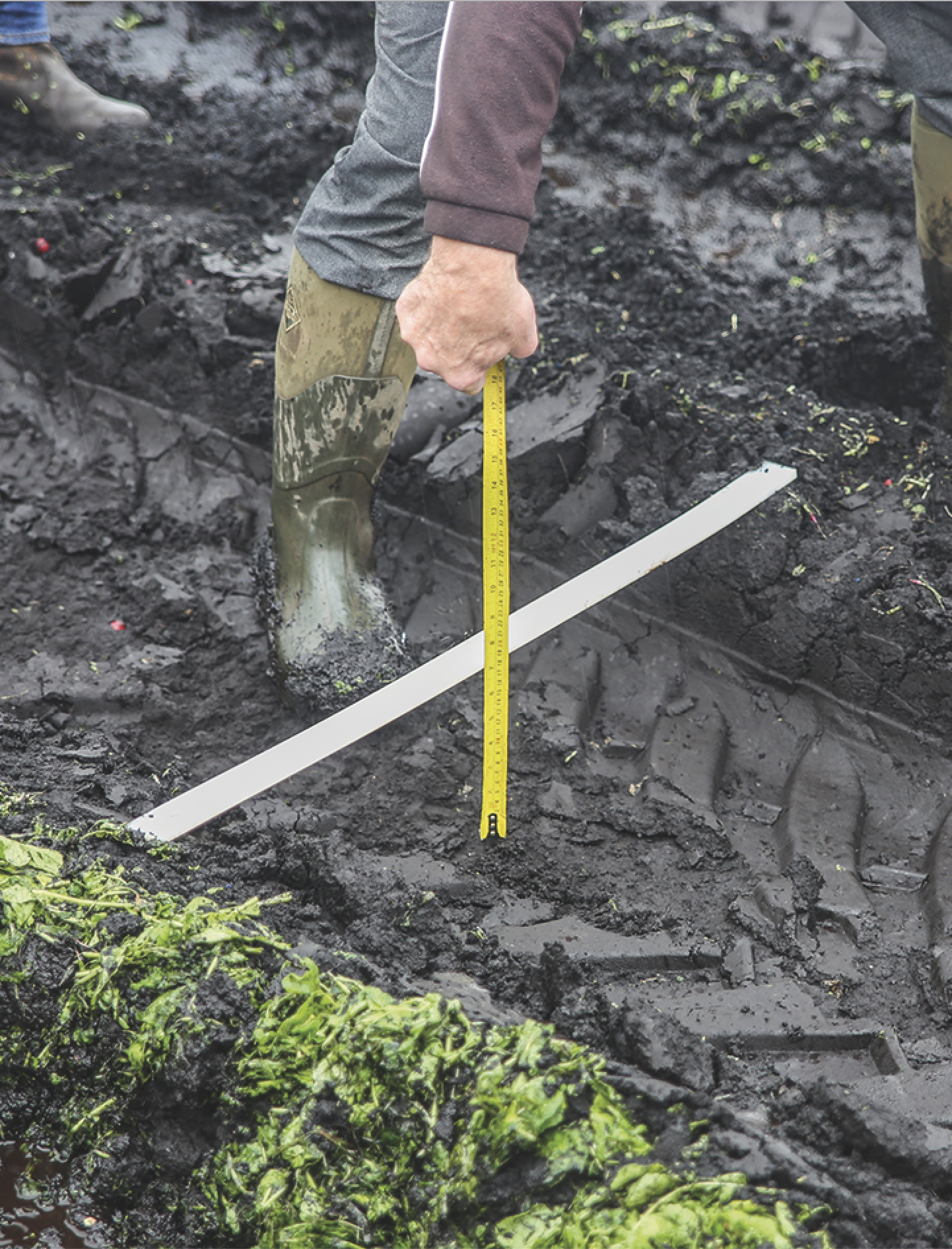 After harvesting, radishes are transported to the farm’s Love Radish processing plant for cleaning and grading. Travelling long distances at high speeds meant that higher trailer tyre inflation pressures up to 3Bar were needed for optimum safety and ride quality. “Most manufacturer- supplied on-board inflation systems use compressors capable of pumping only 6ft3/min, so inflating large tyres like these takes too long,” continued Richard. “For the radish production team, a system is needed capable of achieving higher road operating pressures in the short time it takes travelling from the headland to the road. On returning to the field, the pressures have to reduce from 3.0Bar to 1.0Bar again by the time the tractor and trailer leave the headland.”

In 2018, Richard visited a Canadian farm show and looked at an after-market tyre inflation system by AgriBrink. “It was quicker than other systems inflating and deflating tyres, but the external pipework put me off as I felt it would be vulnerable to damage,” he explained. “However, its rapid operation was just what Scott and his team needed, so earlier this year I contacted the manufacturer again and imported a unit to trial.”

The AgriBrink Air Inflation system includes a 200ft3/min compressor driven from the tractor’s hydraulic oil supply, and two 80-litre tanks holding compressed air at 9.5Bar pressure act as reservoirs. Everything is within a neat frame mounted on the front linkage. Control is through an in-cab terminal and the system is Isobus compatible.

Field and transport operating pressures are set and memorised. Then the operator has only to select road or field mode and required pressures for the tractor wheels and trailer are applied. Unlike other systems using a central pressure control, the AgriBrink design has a separate controller on each wheel. When pressures are reduced, air is released quickly through an exhaust valve on each wheel.

“It’s a very practical design and increasing the tractor and trailer tyre pressures for road work takes only 90 seconds, then reducing them for field work again takes under 20 seconds,” stressed Richard. “A pressure relief valve protects against over-inflation, and if the operator forgets to increase pressures for road work, then an alarm sounds when pre-set speeds are exceeded.”

After becoming the UK importer, Richard displayed the AgriBrink system on the Larrington Trailers stand at Cereals this year, and there was considerable interest although the external air lines caused some concern. “They aren’t a problem – operators know they are there, they are within the width of the front bumper bar and the tractor’s rear-view mirrors stick out further,” Richard stressed.

Sam said the AgriBrink system works well, and operators find it easy to operate. The external pipes haven’t been damaged during the first season’s use. One tractor is fitted with the AgriBrink pressure adjustment system so far, and two trailers have been equipped with compatible wheels and pipework. Two more radish trailers and a salad trailer will also have the system installed.

Larrington Trailers provides a supply and fit service for the AgriBrink system. The front-mounted pump and air reservoir assembly plus tyre inflation valves and pipework for the tractor costs £16,950 including fitting, and the cost per wheel for trailers to be equipped with the system is £1,200. New rims and tyres might also be needed, and Richard Larrington recommends ordering new tactors and trailers on VF tyres for potential cost savings later.

AgriBrink president Jake Kraavenbrink said the rotating wheel valves and other components are identical to those fitted to commercial vehicles and are designed to last more than one million miles, so will easily stand many years of low-speed agricultural use.

“Advantages over manufacturer- supplied on-board tyre inflation systems include faster operation, less complexity and a much cheaper cost,” confirmed Richard. “Reducing soil damage and compaction increases crop yields and profits, and reduces costs of soil structure repair. The AgriBrink system is easily moved to a new tractor or trailer when machines are updated, so the return on the investment will continue for many years.”

“It’s been very successful,” Sam concluded. “We are impressed by the VF tyres and being able to optimise pressures for field and road applications allows us to get the best performance in both situations. Whereas tracks would remain flat on the surface and struggle for grip in slippery conditions, tyres operating at low pressure flex and stay clean, and they mould themselves around undulations and grip well. There is reduced wheelslip, the trailers are easier to pull so less power is needed and we save fuel too.

“Looking at the field after harvesting, the benefits are obvious. We have reduced soil structure damage and disturbance, and greatly lessened the environmental impact of our activities.”