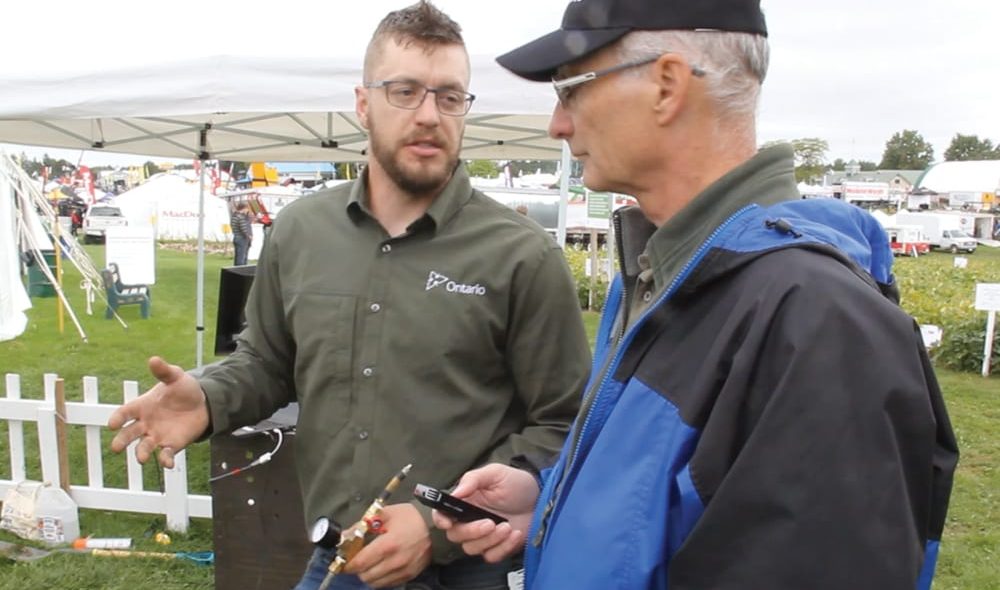 It wasn’t all that long ago that many agronomists in Canada weren’t even willing to concede soil compaction might be a problem. The freeze-thaw cycle, many argued, significantly mitigated it. But now with more available data and new thinking, most seem to agree that the seasonal temperature cycle doesn’t fully eliminate the problem. And preventing soil compaction is something farmers should keep in mind, particularly with the scale of modern farm equipment.

At Canada’s Outdoor Farm Show in Woodstock, Ontario, in September, Alex Barrie, engineer in training with the Ontario Environmental Management Branch, was demonstrating his group’s efforts to study the impact equipment can have on the soil. They have been conducting tests in many areas with different soil types to try and come up with data farmers can use when setting tire pressures for fieldwork.

Barrie says all the data should provide a better understanding of “what goes into causing compaction from vehicles.” His display at the show was meant to highlight the fact that even big tires can cause damage if inflation pressures are set too high.

“On average we use 15 p.s.i. for most soils as the threshold for causing compaction,” he continues. “But some soils if they’re dry might be a little stronger, and some soils, if they’re wet, might be a little weaker. So 15 is the number for average soil, and that came from some European research. If we run enough of these events we’ll have a good database on a variety of tire sizes and pressures in a variety of soil conditions.

“The biggest take-home message we’ve been finding when we do these events is not, ‘Should I go out and by 900 metric tires or something twice as wide,’ it’s just, ‘weigh your equipment and understand what tire pressure could be used to safely carry the load.’ A lot of the time tires are over-inflated, or at least have the potential to come down. 19 p.s.i. down to 17 p.s.i. isn’t just two p.s.i.; it’s five or 10 per cent. So that’s pretty substantial.”

But even after weighing a machine, Barrie says producers need to understand the effect of the work they’re doing in the field on each machine.

“If you weigh a machine in the yard and you go out and use it in the field, the weight changes,” he says. “In the case of big tillage equipment that takes a lot of draught force, you’re going to load up the back tires heavier than you would when it’s sitting in the yard. So you might need a little more pressure than is recommended for a static load.”

Auto-inflation systems can provide benefits, Barrie notes. But producers who don’t want — or can’t afford — the investment in a system like that can still take some steps to minimize the problem.

“It’s (an auto-inflation system) one option,” he says. “Causing compaction is really a management decision. The order of things you should look at is what’s your tire pressure, how heavy is the equipment, could I wait one more day. A lot of the time with some cropping systems being calendar driven rather than condition driven, a little extra moisture is probably going to drive compaction deep into the soil and give you those deeper problems that are hard to fix. It causes a whole host of problems. There are things you can do that don’t cost much money.”

The team’s research is finding soil compaction can extend down pretty deep in some soils.

“In a sandy-loam soil we were seeing pressures high enough to cause compaction at 20 inches, that real deep compaction,” he says.

The group plans to continue its research until it has a large enough database to publish some inflation pressure guidelines and conclusions.

“We’re right in our infancy,” he says. “This is the first year we’ve had the (testing) equipment to ourselves.”