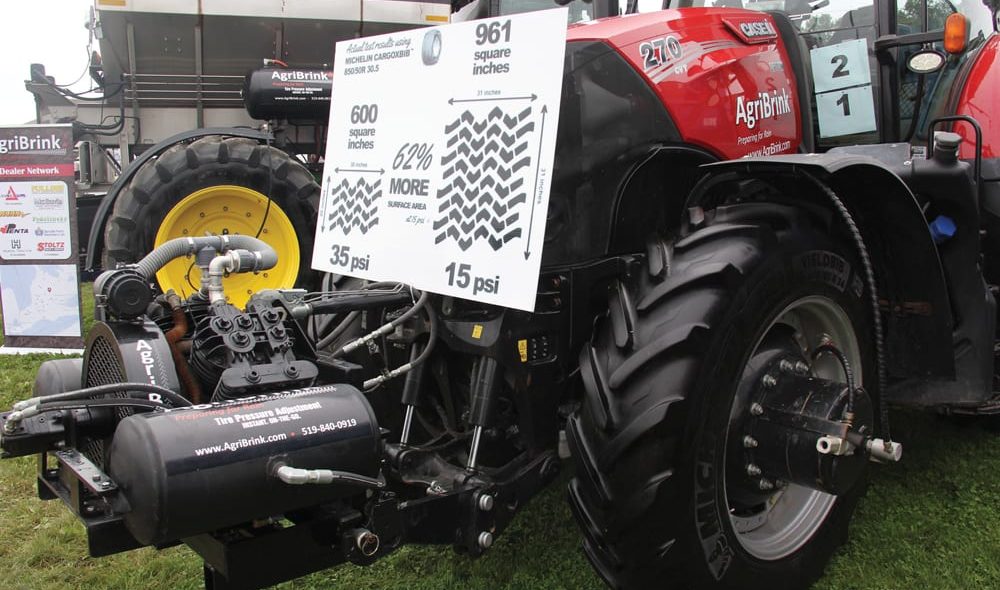 Aftermarket system allows for auto tire inflation from the cab

That big, new aircart that recently arrived on the farm has the widest available radial tires on it, so there’s no need to think about soil compaction, right? Wrong. Choosing the right rubber is only the first step in ensuring equipment does the least possible damage to soil.

Kraayenbrink adds that the creation of his company, like so many others, was the result of trying to find the right system for his own on-farm needs. He wanted to have the ability to quickly adjust tire inflation pressures on his equipment to minimize soil compaction.

“We looked at getting a tire inflation system for our farm,” he explains. “We ended up with a truck system, however, truck systems are designed for high-pressure, low-volume tires (the opposite of ag tires). In agriculture we don’t have time to wait, and moving air in and out of the tire is key. If the system doesn’t operate quickly, it’s a great idea but you won’t use it, right?”

When that system didn’t meet his needs, Kraayenbrink says he was encouraged to create his own by an engineering acquaintance. From then on, the AgriBrink system began taking shape.

“We were part of a research project in 2010, 2011 with Ontario Pork,” he continues. “We were looking at a system to inflate and deflate tires to reduce compaction. We didn’t even realize all the significance of that technology. We found in Canada there was nothing that worked really well. So we went to Europe, to six countries, and learned a lot, an awful lot. However, we couldn’t find a company that would support us with a system here in Canada.”

With roughly 80 of his own systems now at work on farms, Kraayenbrink is looking to make a larger impact on the Canadian market and expand his company’s presence.

“We feel our system has been tested for enough years now, and it’s working,” he says. “We’re establishing a dealer network, you’ll be able to see it right on the website.”

So far, he says, the feedback from customers has been positive.

“There are customers we have that say their hay isn’t dying out where they’re driving anymore.”

Now after crunching some numbers based on those real-world uses, he believes customers will eventually see a financial payback on the investment in an auto inflation system, because of the reduced damage done to fields. And that holds especially true when hauling very heavy implements. When displaying the AgriBrink system at Canada’s Outdoor Farm Show in Woodstock, Ontario, in September, he chose to show the system fitted to heavy liquid manure haulers to emphasize that point.

“We can do a lot less damage in the field. With that tanker back there, we can gain 60 to 70 per cent more (tire) surface on the ground,” he says, pointing to the model on display at the show as he spoke with Grainews. “And within a minute we’ll make that tire hard to go on the road. The faster we go, the harder the tire has to be. The slower we go and carrying less weight, the softer the tire can be.

“With our system we can do four different tire channels. What I mean by four tire channels is the front tires require different pressures than the back ones do. So we set that in our controller. We pre-set that in the cab. So when you push the toggle switch down, all four tires go to their pre-set pressures. And when you inflate they go back to their tire pressures.”

To ensure the system doesn’t leave a machine stranded in the field with a deflated tire if an airline gets snagged on something and ruptures, the AgriBrink system uses a failsafe to prevent a tire from deflating if the system can’t refill it.

“The tire has a safety valve,” he explains. “If a line breaks, the tire will only deflate to its set pressure. We’ve designed it so the system will never leave you in the field. We can override it manually, so you can inflate or deflate, but you’ll always be able to go. We know we can run on hard tires. It’s not great for the soil, but what’s worse is if you can’t do anything. So it’s built from a farmer’s perspective.”

To minimize costs, a single compressor mounted on the tractor can handle all the inflation needs of both the tractor and implement.

“There are a number of systems that have a compressor on every component,” he says. “They become very expensive. But we have a compressor on the tractor, so we can hook up and use any implement. We only need wheel kits and an air tank. We can add to our (tractor controller) channels. It makes it very versatile.”

Kraayenbrink hopes to soon have even more hard data to back up his claim that the agronomic advantages offered by his system can produce a payback; AbriBrink is currently being evaluated in an independent university study.

“The University of Bern in Switzerland has a system,” he says. “They’re testing and verifying it. We’re excited about that, because they picked ours out of all the systems out there.”