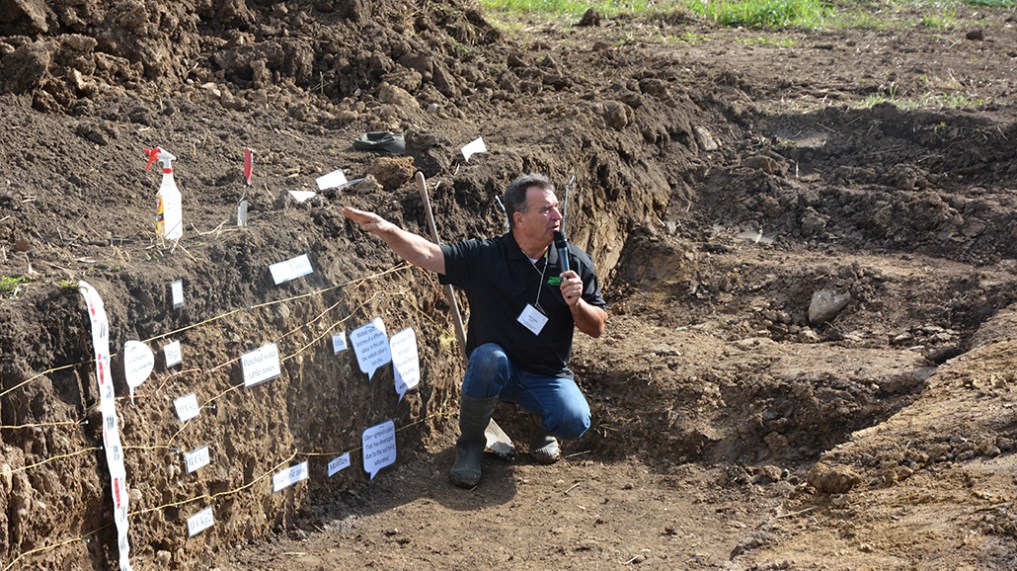 IF YOU’RE CAREFUL about keeping your fully-loaded sprayer out of wet spots and not leaving big ruts, then it’s not doing any real damage, right? Not quite. In fact, the damage and long-term effects caused by soil compaction go far deeper than what you can see on the surface.

That’s just one of the many hard-hitting facts to come out of Compaction Action Day, an event organized by the Innovative Farmers Association of Ontario (IFAO) that saw almost 400 farmers, equipment dealers, agronomists, researchers, and extension specialists gather at Shawridge Farms in Arthur, Ontario.

The event’s main aim, says Jake Kraayenbrink, IFAO director, was to focus farmers’ attention squarely on the issue of soil compaction by giving them an up-close and personal look at the damage that can be caused by farm equipment.

“We’ve got to first recognize that we have a problem, and if we don’t change that problem, it’s only going to get bigger,” he says. “What we hoped to achieve on that day was to show people that this is science, and that what compaction is doing to our soils is very real.”

Kraayenbrink points out that equipment just keeps getting bigger and heavier. Tractor weight alone is increasing at a rate of 500 pounds per year, let alone combines, buggies, and manure tankers. And with this trend towards using larger, heavier equipment, comes an increased risk of soil compaction damage.

“The soil has to sustain that weight, and it just can’t keep going that way. Compared to 50 years ago, we’re farming in a completely different environment, where equipment weighed 14 tons instead of 50 tons like it does now, and there was much more organic matter to act as a cushion,” he says.

“We don’t have the luxury of making sure soil is strong enough to hold heavy loads,” adds Alex Barrie, a project engineering intern with the Ontario Ministry of Agriculture, Food and Rural Affairs (OMAFRA). “It’s almost like designing a building to stand on the foundation that’s already there, rather than building from the foundation up.”

The risk and severity of soil compaction damage also varies by soil type and soil moisture, with wet soils at planting time being one of the biggest culprits, says Ian McDonald, applied research coordinator for field crops with OMAFRA .

“We tend to go too early onto wet soil because we think we can’t wait. But by going in, we end up doing more damage to yield potential by compacting the soil than what would come from a couple extra days of later planting when the soil was fit to be worked,” he explains.

One of the featured experts at Compaction Action Day was Matthias Stettler, a research fellow from Bern University of Applied Science in Switzerland, who specializes in studying the effects of soil compaction.

Stettler showcased a series of specially designed, pressure-sensing probes that were placed in the soil at depths of six, 12, and 20 inches to measure the amount of pressure that farm equipment exerts throughout the entire soil profile.

Farmers then watched as some 73 different configurations of farming equipment — from combines to pickup trucks, each with different tire and track setups — rolled over the sensors, which displayed real-time results on a jumbo screen.

Those results, says Kraayenbrink, caught many attendees — himself included — by surprise.

In one case, they saw that a loaded pickup truck caused similar surface compaction to a massive, 70-ton manure spreader outfitted with large tires that were deflated to the correct pressure using a unit mounted tire inflation/deflation system.

“We do want people to understand that this was one day, one event, and under a specific set of soil conditions — it’s not a perfect science,” says Kraayenbrink. “But the intent was to visually show that there are a lot of unacceptable pressures being put on our soil.”

According to Stettler, topsoil compaction stress is mainly affected by tire width, volume, and inflation pressure, and he recommends that farmers run their tires at a maximum 15 psi in the field and strive to go even lower.

When you get into subsoil depths of 12 and 20 inches, the effect of tire size and pressure isn’t as important. Rather, it’s axle — or wheel — loads that cause compaction stress throughout the soil profile and into the deep layers.

Stettler’s rule of thumb: If you go over five tons per wheel or track, you start running the risk of subsoil compaction damage, which can be felt for decades.

“When we talk about subsoil compaction damage, we can say that it’s almost permanent,” says Stettler. “And it’s extremely difficult to manage or even correct once compaction takes place.”

“That shows us what they destroyed 40 years ago with heavy machinery could still be seen in the subsoil. So once you compact soil, you damage the subsoil and it’s almost persistent,” explains Stettler. “That means poor drainage, lower microbial activity, and less root growth.”

Topsoil compaction, on the other hand, is not quite as permanent an issue and can be repaired through management, such as planting a cover crop, crop rotation, and reduced tillage to boost organic content. Tillage can be also used to correct shallow compaction, but if not done carefully, can make soil prone to even more compaction.

As for whether tracks or tires are the best option for reducing compaction, Stettler explains that while tracks spread out pressure over a wider footprint, they’re often used on heavier, bulkier equioment that can cause deep compaction damage simply because of its weight.

“Tracks perform well for the topsoil, as they spread pressure out over a wider footprint, but then the subsoil has to counteract and compensate for this weight,” he explains. “That’s why we have higher risk of subsoil compaction with large wheel loads.”

From an agronomic perspective, the yield loss due to soil compaction isn’t always visible — but it can add up to become a serious problem, says Peter Johnson, agronomist with Real Agriculture. Over time, the yield losses creep steadily upward. Then, instead of getting 240 bushel corn, a farmer might only get 215 bushel corn.

“Soil compaction is insidious. It’s not something obvious that you can plainly see — like a manganese deficiency where your crop goes yellow,” says Johnson. “Every year, you’re adding a little more yield loss, a little less drainage capability, a little less stress tolerance. Next thing you know we have to split the tile, because the field isn’t draining. And that is a major cost.”

Johnson points out that as yields continue to climb and crop genetics improve, growers question whether compaction is a real issue at all.

“If a grower gets a piece of new ground — like an old pasture — their yields will blow past all their other land, even if the new land has low soil fertility,” he explains. “Compaction is a big part of that difference.”

As for what can be done to combat compaction right now, Darryl Burnett, IFAO president, says that there are plenty of options — such as newer tire technologies, tracks, and onboard inflation/deflation systems — that farmers can adopt.

“It’s well worthwhile to give a lot of consideration to what rubber you’re putting on a piece of equipment. The rubber on the ground shouldn’t be a last-minute thought, or no thought at all. You need to match the tire or track to the implement,” he says. “It can be costly, but then again so is getting 20 per cent less yield over time because of compaction damage.”

Kraayenbrink says that the IFAO Compaction Action Day was just the beginning in terms of putting numbers to compaction pressures and pieces of equipment, and the group hopes to do more. But what the day really did was kick start the compaction conversation, and make farmers think about what they are doing in their own operations.

“We learned that we have to start learning more,” says Kraayenbrink. “Compaction is not just a concern for agriculture, but for all society, as it affects our food source.”

Plans are also underway to have the soil sensor equipment used by Stettler made available for other, future compaction awareness events in Ontario.

The full set of compaction results will be posted on ifao.com on March 1. IFAO has also put together a series of videos featuring the experts and topics drawn from Compaction Action Day. A series of articles will also appear in future issues of Ontario Grain Farmer based on these topics.